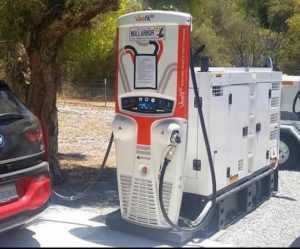 Using Diesel To Charge Your E.V.

Many posts, photos and rumours are popping up about using Diesel to charge your new electric vehicle. We already shed some doubt on the sustainability of EVs in a prior article Electric Car Batteries, Are There Enough Resources.

However there seems to be a more direct contradiction going on now, and that’s mainly in places with shoddy power connections. Often seen as either a charging station directly connected to a diesel generator or a small generator being towed by roadside assistance with connections for EVs so they can charge your car on the side of the road should you run out. It doesn’t stop here though. On the outskirts London there are rumours of towns with unreliable energy and the council decided using a large diesel generator would be the correct solution.

The Disappointment Of The Populace

To set the scene, imagine you’ve just spent over a hundred thousand pounds or euros on a brand new shiny electric vehicle. After all that time of hearing how awful diesel is and we should be eliminating it, you decide to pick up an EV and help contribute to the future of the planet. Only to find out that you have to charge it using diesel power, the element you was told you’d be avoiding. Now to be fair, there has been talks about some generators using vegetable oil rather than diesel which is a step in the right direction.

The conclusion is hard to reach, EVs are a step in the right direction but so far we’ve had very poor execution. Whilst the vehicles themselves are great, fast and look fantastic (they could sound better) the technology either just isn’t here yet or we’re being incredibly inefficient. We should’t be relying on fossil fuels to fuel the new tech that’s supposed to free us form fossil fuels, and we shouldn’t have to produce such pollution to fabricate batteries that have a relatively short lifespan for the price, effort and pollution.